http://www.youtube.com/watch?v=1yuK4m3UzRk
Pete Seeger always said it best.
Posted by Unknown at 6:35 AM No comments:

You Tell Me Your Dream---Salty Dogs of Chicago

With all the serious stuff going on in our lives and the world, I was so happy to run across this great tune from the Salty Dogs. I sure do miss those years when the Windy City Allstars were at Andy's every week playing great Dixieland and lots more. And Kim was in our wedding band. The best ever!
Thanks for sharing the joy!
Posted by Unknown at 7:04 AM No comments:


When I Rise is a documentary about Barbara Smith Conrad, a talented woman who was among the first African Americans admitted to the University of Texas at Austin in 1957. This woman, who auditioned for and got the role of of Dido in the opera Dido and Aenaes, was then denied the right to sing by the Texas State Legislature only because of the color of her skin . Her representative to that legislature was the man responsible for having her removed from the role.

Her dignity and courage during that shameful incident and her subsequent successful career and the efforts by that same legislature and university to make it right, is the story that says it all about the struggle for civil rights. If I taught a class, I would use this film. She was raised during a time when African Americans rightfully feared for their lives at the hands of the white people in power. Although there are no dogs or hoses or beatings, it is her story, quietly and beautifully told, that so eloquently says why, to paraphrase what Dr. King said, it is the content of their character, and in Ms. Conrad's case, her absolute talent, by which people should be judged, not the color of their skin.
Posted by Unknown at 6:26 AM No comments: 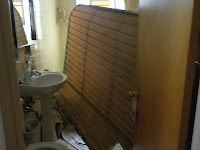 We made it through the blizzard fine. Our awning ... not so fine.

So there we were, about 11:30pm safe from the raging blizzard outside, drinking wine, staying warm and watching TV, when we heard a loud banging at the front door. When we opened the door we saw our 6 foot by 6 foot awning hanging precariously by one corner and flapping loudly against the door. Suddenly, with a large bang! it fell on the porch. The whole awning was leaning heavily against the front door, making it impossible to open. The wind was howling around it and we didn't want it to blow through someone's window. So Mark was a real hero and had much greater presence of mind than I did. He braved the 50mph winds and driving snow and went out the back door and around the house to the front so that he could move the awning away from the door. Once we had the door open, we ignored the snow and wind and picked up the awning and moved it into the bathroom, dripping wet. Each time we passed the bathroom we marvelled that we had our awning in our bathroom. It's by the side of the house now and we're thinking the garbage men will take it away next week. The house looks a little bare without it.
Posted by Unknown at 1:20 PM No comments: