Social Security has a $2.7 trillion surplus, can pay all benefits owed to all eligible Americans for the next 21 years and, because it is funded independently, has not contributed one penny to the deficit. Bernie Sanders agrees with AARP, the National Coalition to Preserve Social Security and Medicare and virtually all seniors’ organizations that Social Security should not be part of the deficit reduction negotiations.
Posted by Unknown at 2:47 PM No comments: 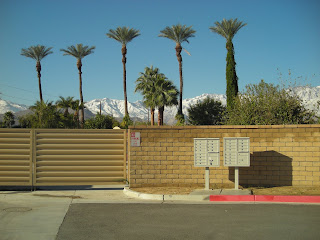 Photo: Snow on the mountains in Palm Springs.

Surreal: having the disorienting, hallucinatory quality of a dream; unreal; fantastic.

This is not the first time I've noticed the surreal quality of our life. 9/11 2001, that was the first time it hit me. We watched the horror going on in New York then we would take a break in the back yard. The serenity of our beautiful yard, our quiet sanctuary from the world, was in such sharp contrast to what was going on New York--it was surreal.

The same thing has hit me several times since 9/11, but Friday was certainly one of those days. Wednesday we laughed through La Cage aux Folles, Thursday we went to Andy's to enjoy the Windy City Allstars playing their upbeat dixieland as only those pros can. Friday we were charmed by Hansel & Gretel at the Lyric. After the performance they came out and expressed sympathy for all the people affected by the tragedy that had happened that day, the very day we were enjoying the opera. A woman sitting in front of us told us that 20 children in grammar school had been shot along with six of their teachers.

And suddenly there we were, caught in one of those surreal moments.

We enjoyed our dinner at the Lyric's Bistro, avoiding the subject for the most part. We knew we'd deal with it when we got home. We watched for hours, cried, tried to figure out why anyone would do such a horrendous thing. And marveled at how surreal it was that we were in this lovely world while this horror was taking place in so many people's lives.

The truth is that neither is surreal, they are both real. The world of nightmarish horror lives side-by-side with the serenity of lives lived quietly under the radar. It is all real. That is what makes it so hard to understand. How can it be that the world is both horrific and beautiful? I have no answers.

Enjoy every day--that's the only thing I've managed to come up with that gets me through. It doesn't contain any answers or comfort, but it is the best advice I can give myself. We never know what will happen in the next moment of our lives, so we should enjoy everything we can and savor it. It is all we have.
Posted by Unknown at 9:11 AM No comments:

Imagine is one of the most beautiful tunes -- lyrics, music and philosophy. We can all hope ...

Posted by Unknown at 9:23 AM No comments:

Muddy Waters and the Rolling Stones, 1981

All you lovers of blues and rock 'n' roll, be sure to see this video made at the Checkerboard Lounge in November 1981. Buddy Guy, Lefty Diz and Junior Wells also joined in. It's a great concert of the music we know and love. I have seen most of these performers live through the years and treasure the memories of those and many other great nights of musical treats.

I think of this as sixties music because that's around when I got introduced to it. I was about 12 or 13 when I started listening to rock--a bit later I got to the blues and folk. I think our generation was so lucky. We had decades of amazing music to become familiar with. Although I wasn't around for the early 1900s, recordings introduced us to everything and everyone.

In my twenties I mostly listened to Bob Dylan, Phil Ochs, Sonny Terry and Brownie McGhee, Pete Seeger, the Rolling Stones, the Beatles, Jimi Hendrix, Cream, the Grateful Dead, Janis Joplin, the Doors, the Band, all the Motown groups, Otis Redding, The Velvet Underground and Nico ... the list is way too long to list here. Many careers were cut short and we'll never know where their music would have gone if they had lived or survived the many band breakups.

When the seventies brought punk rock, I felt lonely. But I think I got into Willie Nelson then and some country. The eighties brought the Clash and Eurythmics (Annie Lennox!), Robert Palmer and quite a few others who continued the rock tradition in a direction I understood. Over the last couple of decades jazz (mostly the music recorded before about 1965), classical and opera were added in to the mix.

It seems to me that music is a universal language that crosses all kinds of barriers with ease. People enjoy it without worrying about who else does or doesn't like it. It's worldwide now--the internet and YouTube have connected the world in a way that we couldn't imagine when I was in my twenties and we all hoped for a united world. We roam freely through the world of music using electronic devices that were equally unimaginable back then. We may never have the world peace we also hoped for, but the world has come together in many ways that are good and healthy and who knows, maybe it will be peaceful someday. Until then, we have music--and that's a huge comfort.