A Tale of Two Conventions ...

The conventions brought two weeks of focus on the election in November. I was not surprised that the Republican Convention made me want to kick in the television. I was amazed at how easily and fully they lied. But the Democrats! Wow! For twenty years, maybe more, I've been hoping they would say out loud and proud what we believe in. And they finally did it. Better than I ever dreamed they would.

I watched the Dems on CSPAN because I wanted to see the whole convention without commentary. (I taped the commentary on PBS and MSNBC so I could see it later.) Whoever put together the lineup of speakers and films from 5pm on every day on was really smart and knew the people and issues well. So many people gave inspiring speeches. I wasn't bored by any of them. I was so proud to be a liberal (progressive?) Democrat.

I've been emailing with a friend who is a conservative and after a few weeks of back and forth, I realized that we had both said our piece about our 'vision' for the US, and neither of us believed the other's sources, so we couldn't really exchange any information or change each other's mind. We called off the political discussion. Sadly, we are a microcosm of the fifty-fifty split in the country and the stalemate in Congress.

I was so glad to hear that the NY Times says if Obama can get out the vote fully, he will win--and that Google searches for the register-to-vote.org website doubled after Obama's speech. 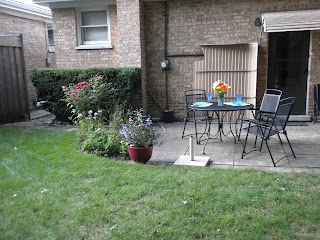 We are released from our hibernation from the heat at last! We went to Millennium Park last night for the Lyric Opera's performance. It was a beautiful night filled with great music and Chicago's amazing skyline along with the changing colors of the bandshell.

Chicago is such a great city! We are lucky to be here. ENJOY!

And here's the NY Times article on how Obama could win if he gets out the vote:

http://fivethirtyeight.blogs.nytimes.com/2012/09/06/obama-would-be-big-favorite-with-fired-up-base/
Posted by Unknown at 8:48 AM